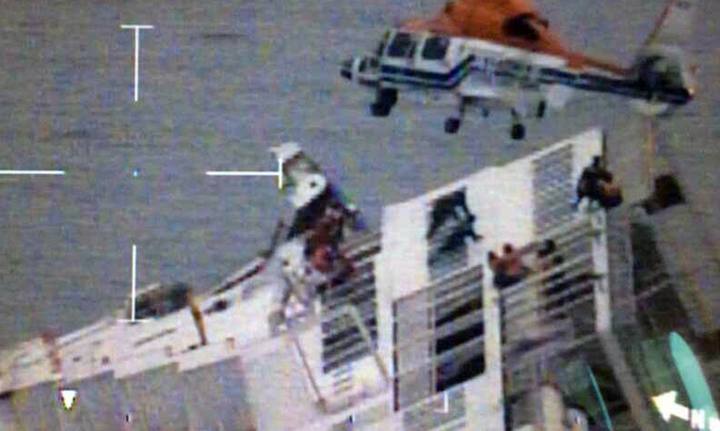 A South Korean maritime police helicopter rescues passengers from a sinking ship in the sea off Jindo, April 16, 2014, in this still image provided by Korea Coast Guard and released by Yonhap. All 338 high school students and teachers on board a South Korean passenger ferry that was reported to be sinking on Wednesday have been rescued, a school official told Reuters. The ferry, identified as the Sewol, was carrying about 470 passengers, including the students and teachers, en route to Jeju island, about 100 km (60 miles) south of the Korean peninsula. It sent a distress signal after it began to list badly. REUTERS/Korea Coast Guard/Yonhap (SOUTH KOREA – Tags: DISASTER MARITIME) ATTENTION EDITORS – THIS IMAGE WAS PROVIDED BY A THIRD PARTY. FOR EDITORIAL USE ONLY. NOT FOR SALE FOR MARKETING OR ADVERTISING CAMPAIGNS. THIS PICTURE IS DISTRIBUTED EXACTLY AS RECEIVED BY REUTERS, AS A SERVICE TO CLIENTS. NO SALES. NO ARCHIVES. SOUTH KOREA OUT. NO COMMERCIAL OR EDITORIAL SALES IN SOUTH KOREA. BEST QUALITY AVAILABLE