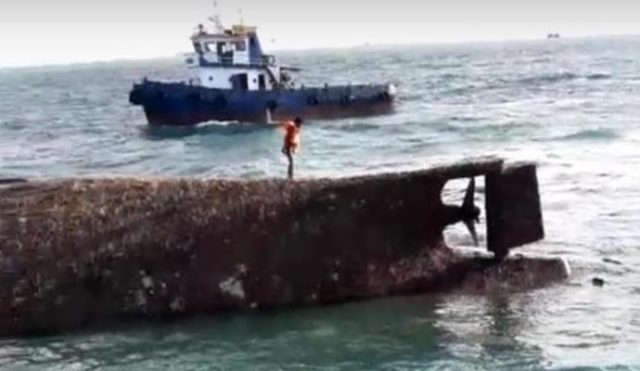 The two men who had escaped tried in vain to hold on to the side of the hull.  Both held on to the scuppers when a large wave washed them away.  They continued to stay near the Scandies Rose as the vessel settled by the stern.  In just a few minutes, only the bow was visible when the vessel’s two life rafts inflated and floated free.  The two survivors were able to climb into one of the liferafts and awaited rescue.  The signal light on their liferaft went dark a short time later making the liferaft less visible. In 20 foot swells with 40 mph winds and air temperature around 10 degrees, the two men had limited time to be rescued.

The Coast Guard had received the distress call and dispatched helicopters to the last known location. A MH-60 Jayhawk helicopter along with a HC-130 Hercules airplane were dispatched to search for survivors. The Jayhawk helicopter arrived on scene and found a lit liferaft in the water. An inspection found it was empty, but the helicopter lights could be spotted by the two men in their liferaft.  A short time later the helicopter arrived over the unlit liferaft with the survivors.  The Coast Guard was able to hoist the two men to safety.  Both survivors were suffering from hypothermia.

The Coast Guard continued to search the area for the missing five crew from the Scandies Rose.  Four helicopters and two aircraft were assisted by the Coast Guard Cutter Mellon searching a 300 square mile area for twenty hours before the search was suspended.  Reports state authorities have launched an investigation into this incident.