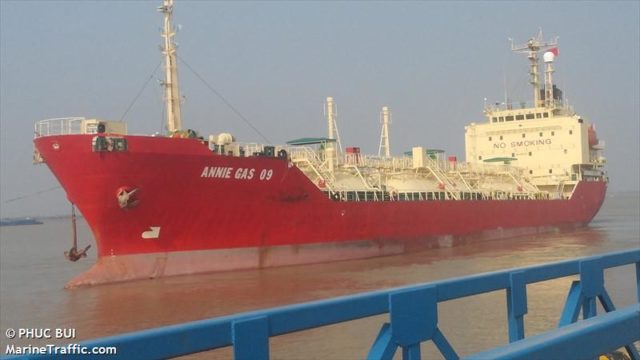 On July 17, Typhoon Talas struck in the Gulf of Tonkin  causing damage to multiple vessels along  Vietnam’s coast.

The cargo vessel VTB 26 capsized in the the Gulf of Tonkin. The vessel was headed to Nghe An from Quang Ninh with 4700 tons of coal. The VTB 26 attempted to ride out the typhoon at anchor some 4 kilometers off the coast.

Authorities were alerted after communication was lost to the ship. The tanker Lam Hong 99 spotted a overturn hull near Hong Ngu Island. Not until conditions improved several hours later, authorities launched a search and rescue operation. Nine vessels began a search of the area for survivors. Some 12 hours later, seven crew from the VTB 26 were rescued. Two bodies were also recovered. Suvivors were taken to hospital for treatment.

The captain of the VTB 26 was  one of the survivors. He stated that the vessel had capsized by strong waves throwing  many of the crew into the sea. He stated several crew were trapped below decks. Reports state 4 crew were still missing.

The 92 meter long cargo vessel Truong Thanh 88 and the 4281 dwt cargo vessel Thai Ha 26 ran  aground during the typhoon. Both vessels had  been at anchor off Cua Lo when strong waves push both vessels ashore. Reports state both vessels were to be salvaged. The 70 meter long Viet Dung 36 was in the port of Cua Lo unloading 3000 tons of salt cargo before the typhoon struck. The vessel attempted to ride out the storm in the Lam River, but was blown onto a river bank with its bow completely out of the water. The cargo vessel Minh Khanh 09 also was blown onto a river bank. The vessel had also tried to ride out the typhoon on the Lam River but  its anchor dragged.

The 53 meter long freighter Chang Xin Shun 888 and the freighter Jin Ma 788 sank in the Gulf of Tonkin near Hainan Island, China.  Both vessels were at anchor when became overwhelmed when the tropical storm Bebinca passed over the area.   Authorities received a distress signal and dispatched rescuers to the scene.   All 12 crewmen from both vessels were later rescued.  Both vessels were loaded with cargoes of coal at the time.  Reports state the Chang Xin Shun 888 sank to the bottom, but the bridge still remains above the surface.