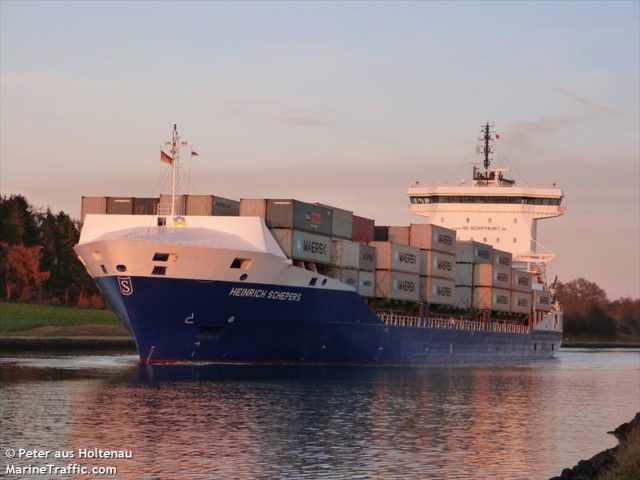 The 152 meter long, 13031 dwt container ship Heinrich Schepers allided with a wall on the Scheldt just outside the entrance to Deurganckdok, Belgium. The Heinrich Schepers had suffered a mechanical fault and swung into the metal deflection wall resulting in a 2 meter hull breach above the waterline. No reports of injuries. Authorities report damage to the wall was minimal and has launched an investigation into the incident.

The 152 meter long, 10600 dwt container ship Heinrich Schepers ran aground on the Kiel Canal near the bridge at Grünental, Germany. While en route to Kotka from Hamburg, the boxship suffered engine damage.  The crew attempted an emergency anchorage, but the vessel ran up on the northern embankment and became stuck. No reports of injuries. Traffic on the Kiel Canal around the Heinrich Schepers was halted as the boxship blocked the fairway. The 152 meter long, 10600 dwt container ship Heinrich Schepers ran aground on the Morskoy Canal, St. Petersburg, Russia. The Heinrich Schepers was departing from St. Petersburg bound for Bremerhaven when it suffered engine failure and drifted aground. No reports of injuries, damage or pollution released. Reports state local tugs were able to refloat the boxship and escorted it back to port.