On April 13, the 35 meter long, 478 dwt tugboat Albert and the tanker barge Margaret ran aground at the entrance to the Detroit River near Peche Island. The Albert was pushing the barge loaded with 3,990,000 gallons of diesel fuel bound for Green Bay when it struck a mud bank just within the borders of the United States. The United States Coast Guard was dispatched to the scene and found the barge and tug firmly stuck in the mud. No reports of injuries, damage or pollution released.

Both Canadian and United States authorities are monitoring the situation. Reports state there are multiple teams aiding in refloating the vessels. Authorities have launched an investigation into the incident.

On February 23, the 35 meter long fishing vessel Calypso Z84 became disabled in the Celtic Sea off Trevose Head, Cornwall, United Kingdom.  The Calypso had suffered a broken gear box and gone adrift in heavy seas.  The crew requested assistance with nearby fishing vessels and the RNLI lifeboat from Padstow responding.  The fishing vessel Soetkin was able to pass a line to the Calypso and begun a tow to Milford Haven.  No reports of injuries.

The tow was later to be transferred to the 34 meter long tug Svitzer Caldey when the tug collided with the fishing vessel. Another tug took over and towed the Calypso to Pembroke. An inspection found the Calypso had sustained damage up to the centreline. Reports state the Calypso was taken to a ship yard for repairs.  No details to any damage to the Svitzer Caldey. 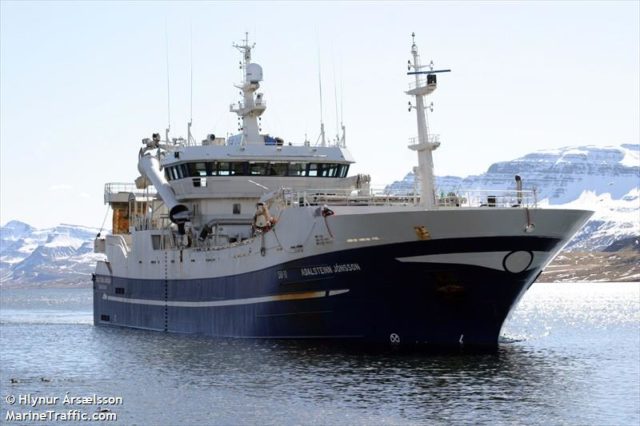