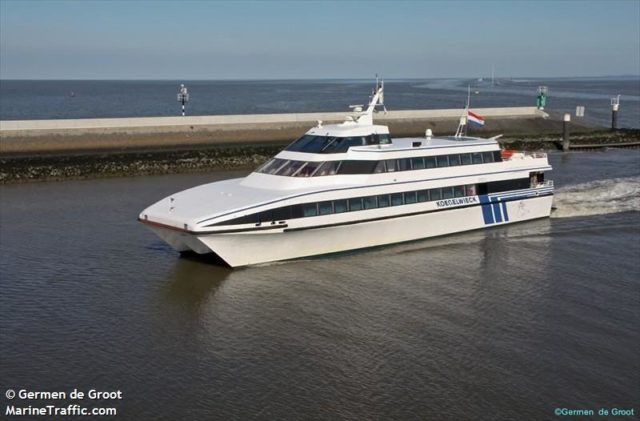 The 36 meter long, 70 dwt catamaran passenger ferry Koegelwieck ran aground in the Wadden Sea near Terschelling, Netherlands. The ferry was en route to Harlingen with 82 passengers and 5 crew when it veered out of the fairway.  Three tugs were dispatched along with a KNRM lifeboat from West-Terschelling to the scene. The tugs were able to free the Koegelwieck which proceeded under its own power to Harlingen.  There the ferry was inspected for damage.  No reports of injuries, damage or pollution released.

On January 31, the 13 meter long water taxi Vigilant collided with the dredger Nova Venture on the Wadden Sea near Nes, Ameland Island, Netherlands. The Vigilant was proceeding to Ameland from Holwerd with 11 passengers. The two vessels were approaching each other from opposite directions. Just before the two vessels would strike head-on, the master of the Vigilant attempted to veer away. The water taxi’s bow struck hard into the dredger causing severe damage to the hull.

Several passengers on the Vigilant were slightly injured,  but two passengers had significant injuries and had to be later taken to hospital in Leeuwarden for treatment. Both passengers recovered and were later released.

Authorities have launched an investigation into the incident. No details reported if any injuries or damage to the Nova Venture from the collision. On February 26, the Antje WL 25 ran aground in the Wadden Sea off Lauwersoog, Netherlands. The KNRM was alerted and dispatched the lifeboat from Lauwersoog to the scene.  The lifeboat made an attempt to pull the trawler free, but strong winds and low tide kept the Antje hard aground.  Not until the following high tide the Antje was able to refloat itself and proceeded to Lauwersoog. No reports of injuries, damage or pollution released.