The 168 meter long, 3067 dwt ro-ro passenger ferry Spirit of Vancouver Island allided with the dock at Tsawwassen, British Columbia, Canada. The ferry was attempting to berth when it struck the dock. The ferry’s bow ramp was damage and required to be cut away to allow vehicles to be unloaded. Reports state the Spirit of Vancouver Island had to cancel several scheduled crossings until repairs could be completed. Authorities have launched an investigation into the incident. No reports of injuries or pollution released. 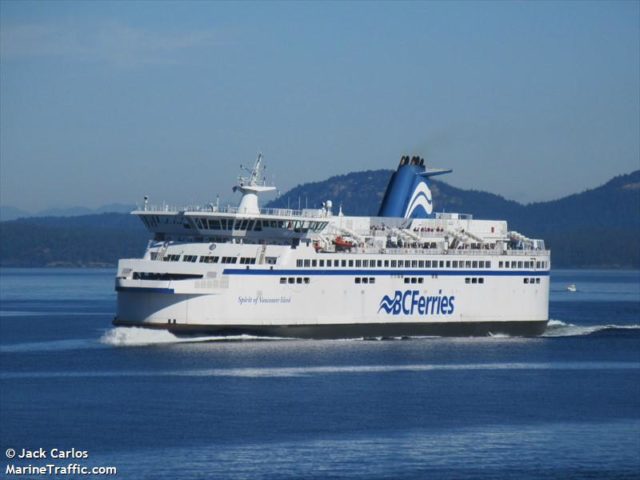 On March 7, the 70 foot long wooden fishing vessel Pacific Pearl sank off Naden Harbour, Queen Charlotte Islands, British Columbia, Canada. The crew had alerted authorities that the trawler had sprung a leak and the pumps were unable to control the flooding. The RCMP and Canadian Coast Guard responded sending vessels to the scene. Rescuers arrived and placed dewatering pumps on the Pacific Pearl and safely transferred all 5 crew off the fishing vessel. The Pacific Pearl was taken under tow, but the pumps were unable to keep up with the flooding. The Pacific Pearl sank and a red buoy was placed over the wreck. No reports of injuries.

The 38 meter long former barge Tyee Princess caught fire while being scrapped at Surrey, British Columbia. Workers were cutting the walls with blow torches when some insulation caught fire.  Dense black smoke was released into the air around the Tyee Princess.  The local fire brigade was contacted and extinguished the blaze.  No reports of injuries. The Tyee Princess was built in 1945 and converted into a coastal freighter after 1974. The vessel was later donated to the Maritime Heritage Society of Vancouver.