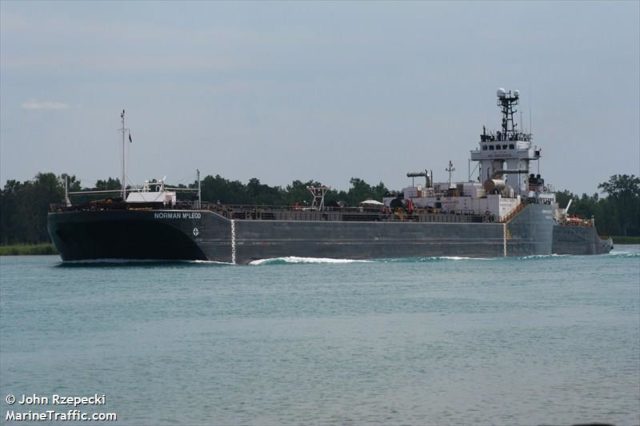 On August 9, the 122 meter long, 6809 gt tanker-barge Norman McLeod went aground on the St. Lawrence River near Sorel, Quebec. The tanker-barge had been at anchor when the anchor chain broke.  The barge drifted away and grounded nearby.  Tugs were dispatched and were able to refloat the tanker-barge a short time later.  No reports of injuries, damage or pollution released.

On August 11, the 70 meter long cargo vessel Hai Ha 38 sank in the South China Sea near Da Nang, Vietnam. The Hai Ha 38 departed from Quang Ninh to Can Tho with a cargo of 1600 tons of bricks.  The Hai Ha 38 proceeded into strong winds caused by a nearby tropical depression when it suffered a cargo shift.  The cargo of bricks shifted and the cargo vessel developed a 40 degrees list to starboard.  With the Hai Ha 38 in danger of capsizing and sinking, the crew sent out a distress call and requested assistance.

Vietnamese authorities dispatched two search and rescue boats to the scene.  Rescuers arrived a short time later and rescued all 11 crew members. One crewman jumped into the sea after panicking, but he was later recovered.  No reports of injuries.

On August 13, the 60 foot long fishing vessel Sebastian Sails caught fire while berthed at Twillingate, Newfoundland, Canada. Witnesses spotted smoke rising from the wheelhouse and alerted authorities.  Before authorities could respond, the blaze had spread through out the vessel.  Explosions and dense black smoke rose from the hull.  Nearby fishing vessels were moved safely away from the Sebastian Sails.  The fire continued to spread and reached the wharf itself.  To reach the burning wharf timbers, fire fighters had to break through concrete and asphalt to reach the flames. After hours of hard work firefighters eventually got the fire under control, but the Sebastian Sails sustained heavy damage.

The superstructure of the fishing vessel had been badly gutted and the vessel later sank at the pier.  Authorities state over 50 feet of wharf had been burnt by the fire.  No reports of injuries.  Booms were placed around the Sebastian Sails to contain any pollution released. Several reports state the Sebastian Sails may be a total loss.  The vessel featured on the Canadian Discovery Channel’s TV program Cold Water Cowboys for four seasons.